Croatia Cruise, on the route R1 by the Yoga Cruise 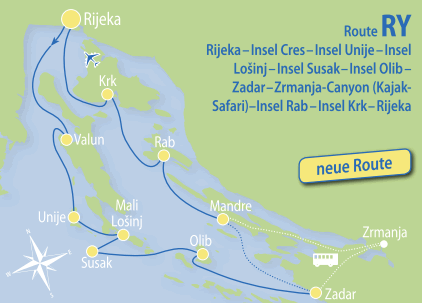 Get on this unique journey from the beauty of the island world charm and return with strengthened mind and body, as well as new knowledge back home.

Succumb on this cruise to the magical and unique beauty of the archipelago and return home renewed in spirit and body, armed with new insights. Our yoga cruise is suitable for every skill level and all ages. Internationally trained yoga teachers invite you to the sundeck twice a day for 1 to 1.5 hours per session to take part in exercises designed to restore the balance of body, mind and spirit. Can there be a better place for this than the semishaded sundeck of the MY Vita with its ample area of just under 200 m²? We enjoy the soothing purity of the sea air as we pass by pristine natural island landscapes and moor in beautiful coves with crystal-clear waters which we dive into with pleasure…

Our route takes us away from the usual routes; in the late afternoon we will stop at tranquil island locations and discover historic old towns. We visit a Mediterranean island fragrance garden, get to know the traditional art of extracting sea salt without salt works, see how cushions are made from natural seaweed and olive oil is extracted without industrial processes and, last but not least, how the Croatian islands are managed ecologically and sustainably.

To complete the experience of wellbeing, the cuisine on board is vege- tarian and wholesome, with a Mediterranean influence and fresh ingredients from the region. Freshly caught fish from one of the cleanest seas in the world rounds off the healthy gourmet experience to perfection. Specially adapted light meat dishes are however offered on request.

After a glass of detoxifying lemon water we start the day at 7:00 am with meditation, breathing techniques (pranayama), stimulating sun salutations and posture exercises (asanas). The wholesome breakfast with oat flakes, muesli, fresh fruit and dairy products is served at 9:00 am. After breakfast we set sail and drop anchor for lunch in a cove for an extensive bathing break, during which lunch is also served. In the course of the afternoon we arrive at our destination for the day; the average total daily cruising time is approximately three hours. Upon arrival a guided tour or visit usually awaits us. At 6:00 pm we meet again on the sun deck for a relaxing yoga session at the end of the day. This is followed by dinner, after which our guests are invited to a series of informative short talks of about 30 minutes in length which are devoted to the holistic philosophy of yoga and healthy eating and offer suggestions on how to incorporate the practice into everyday life.

Between 11:30 am and 1:00 pm, embarkation at the port of Rijeka. If you are coming by car you can drive into the port from 10:00 am. Our service team will then direct you to the garage and transfer you back to the port. After embarkation our guide will greet you with a welcome drink, and you will have a chance to get to know the crew and your fellow passengers. After a snack on board we weigh anchor and head off for the island of Cres which, with an area of 405.78 km 2 ,, is exactly the same size as the island of Krk. Cres and Krk thus share the honour of being the largest Adriatic islands. Our first stop is a secluded cove, where you will for the first time be able to dive into the wonderful waters of the Adriatic. We then set sail for the tranquil fishing village of Valun, where the popular Austro-German television series “Der Sonne entgegen” (“Toward the sun”) was filmed in the mid-1980s.

After breakfast our first port of call is the island of Unije, whose only village is home to around 80 inhabitants. We drop anchor in a cove near one of the island’s many fine pebble beaches. After lunch our cruise continues to the island of Lošinj, which is not only renowned for having 300 cloud- less or only slightly cloudy days per year but is also covered with dense pine forests. Upon arrival in Mali Lošinj we visit the “Mediterranean Fragrance Garden” where more than 250 species of scented plants thrive, some of which we will get to know during a tour with a knowledgeable guide..

With a little luck we may be able to watch dolphins playing in the waves, since the waters around the island of Lošinj are home to more than 160 dolphins registered with the “Adriatic Dolphin project”. Our first port of call is the island of Susak. The island is a geological phenomenon, as it consists of calcareous sandstone and sand, mostly overgrown by reeds. Only six nautical miles from Mali Lošinj, a dialect is spoken on the island which is understood neither in the rest of Croatia nor on the nearby island of Lošinj. Another feature is the brightly coloured traditional costumes whose skirts end above the knee and which are still worn today on special occasions, such as weddings. After a break for bathing and lunch, we continue to the island of Olib, which is part of Dalmatia. On Olib we find out about the sustainable development of the island, about the traditional extraction of sea salt, olive growing and oil extraction, as well as the cultivation of strawflowers and the production of cushions and mattresses from seaweed. We visit the local olive oil mill and the “Kaštel” fortified tower, built in the 16th century as protection from pirates.

Today we set a course for Zadar, the former capital of Dalmatia. After mooring in Zadar, our local guide will be on hand to take us on a guided tour of the old town, which is surrounded by mighty walls and rich in historic monuments. The guide will show you the main attractions – such as the Roman Forum, the round church of Sveti Donat (St. Donatus), the cathedral of Sveta Stošija (St. Anastasia) and the world’s only sea organ, whose sound and “melodies” are generated entirely by the waves.

After breakfast we visit the market with our catering team to find out what to look out for when buying fresh ingredients. This is followed by a coach trip to the river Zrmanja. Here we switch to kayaks and, after a little instruction, head downstream over rapids and waterfalls (if the water level is very high the excursion will instead take place in large inflatable rafts). At lunchtime we stop for a picnic (with a packed lunch from the ship) at one of the most beautiful places on the river, where you can swim below the waterfalls in crystal-clear water. We then paddle on through the Zrmanja Canyon with its unique landscape and bird life. There then follows a coach transfer to Mandre on the island of Pag, where we once again board our vessel to continue on to the island of Rab.

Thursday: Island of Rab–Island of Krk

The old town of Rab with its striking bell towers extends along a narrow and rocky peninsula, surrounded on two sides by water. Three roads run through the old town - the “Low Road” (Donja ulica) with its cafés and bars, the “Middle Road” (Srednja ulica) with boutiques, souvenir shops and ice cream parlours, and the “High Road” (Gornja ulica), which leads to the four churches with their bell towers. After breakfast there is a guided tour of the old town, followed by an opportunity to visit the “Natura Rab” shop. The family business is concerned with the organic production of honey products, olive oil, aromatherapy products, natural creams and essential oils from over 800 herbs that grow on the island of Rab. We then leave the town of Rab and set a course for lunch for the bay of Supetarska Draga with its numerous small sandy beaches. In the afternoon our next port of call is the town of Krk on the island of the same name.

Today it is time to say farewell to the Croatian archipelago. From Krk we head back to Rijeka – not without one last ample opportunity to swim in one of the island’s coves.

They cook for you

Branko Ognjenović is one of the most famous chefs in Croatia, Member of Gastro Academy, Chef at World Congress of vegetarians in Cavtat, TV chef, Lecturer at the Faculty in Opatija, but in love with his craft primarily and always wholeheartedly this, when creativity in the kitchen is in demand. Annmaria Dobrovac After her Abitur initially studying oenology completed in Porec, to then at the Culinary Institute of America in New York - one of the most renowned cooking schools around the world - to do a further study. We have succeeded, each one of the two trips for our yoga cross to win, so you are also culinary pampered. 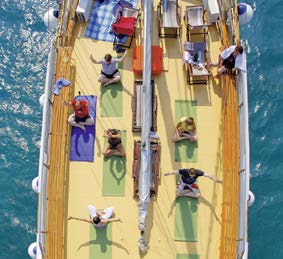 Iva Hafner took after her tourism studies over an extended study tour in India for yoga. She could feel the beneficial interaction of strength and peace affects their daily lives positively and decided to visit the international hatha yoga school in India, where she graduated as a trained yoga teacher.
For Iva Yoga means an exciting journey into the interior, they loves to share with others. 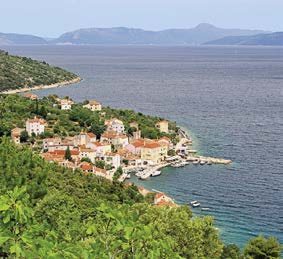 With kayak downriver rapids and waterfalls (at times of high water level of the excursion is alternatively carried out with large inflatable boats - Rafting).